Whether you’re a fluent Welsh speaker or just looking to practice your Welsh, the GymGym will give you a range opportunities to socialise with other Welsh speakers in an informal environment. It's a great opportunity to make new friends. The Welsh Society meets regularly organising a host of social activities through the medium of Welsh including rugby trips, gigs, and crawls, Inter Eisteddfodau and much more. The Welsh Society works closely with the Coleg Cymraeg Swansea Branch and also supports the University’s Welsh Language rugby and netball club, Rygbi a Phêl-rwyd Tawe.

In 2016-17 the Gym Gym was one of four Societies to receive 'Gold' within the Swansea University Student Union system. The society is now a 'Golden Society'.

The Inter-college Eisteddfod was held at Swansea University in 2019.

The Eisteddfod, which was held on the 1st and 2nd of March, included various competitions - both stage and homework including poetry and prose, art and science. There were also specific competitions for Welsh learners.

As well as the Eisteddfod on the Saturday, inter-college sports competitions were held on Friday 1 March, including a rugby, football and netball tournaments and the weekend ended with an epic gig on the Saturday night with some of Wales' best Welsh bands, Candelas, Mellt and HMS Morris.

Here are some images from the 2019 Inter-college Eisteddfod! 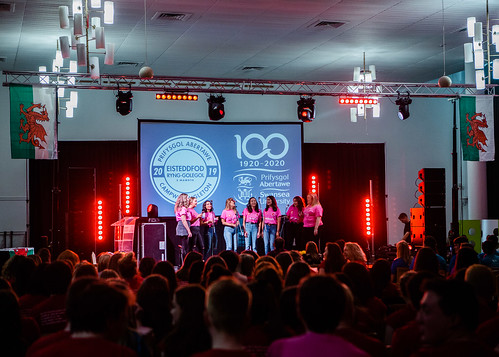