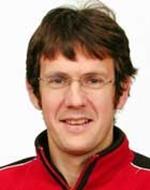 My research is on Polymer Physics, which falls within the broad subject of Soft Matter. My focus is on the behaviour of macromolecules at interfaces and in thin films.

My work investigates the behaviour of polymer-based systems including amorphous/flexible polymers, semi-conducting (conjugated) polymers and polymer/small-molecule (eg fullerene) mixtures. I utilise experimental techniques such as neutron and x-ray scattering, optical microscopy and scanning probe microscopy to probe fundamental aspects of behaviour (such as mixing thermodynamics).

My interest in Soft Matter began when undertaking a PhD (on granular materials) under the supervision of Sam Edwards at the Cavendish Laboratory in Cambridge. I then worked in industrial research (Courtaulds plc, Coventry), on computational & experimental aspects of polymer processing for 6 years. This was followed by 6 years as a post-doctoral researcher working on polymer thin films and interfaces (investigating dewetting, protein adsorption/conformational-change and conjugated polymer thin-films) within the group of Richard Jones in Sheffield University Physics department. I joined Swansea University in 2004.