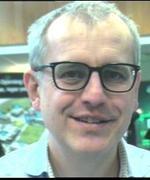 Dr Simon Brooks is an interdisciplinary scholar who works across many fields including history, the history of ideas, multiculturalism, political theory and public policy. He also has an interest in language planning.

His seminal monograph, Why Wales never was (2017), argues that the collapse of the Welsh language in 19th century Wales, and non-development of a significant national movement, can be attributed to the strength of liberal universalism in Wales at that time.

In 2018, he published an autoethnographic study of a Welsh-speaking community in north-west Wales, Adra (Home).

His latest book, to be published this year, Hanes Cymry (A History of the Welsh), will be the first book-length general history of ethnic minorities in Wales.

Dr Brooks has published previously a monograph on the Enlightenment, and co-edited a book of collected essays on language planning.

He is the General Editor for the University of Wales Press of a series of intellectual biographies, Dawn Dweud.

Dr Brooks has been appointed to advise Government as a member of the Welsh Language Partnership Council. He currently chairs the Council’s Group on use of Welsh in the community following the Covid-19 crisis.

He is a member of the University’s Morgan Academy.

Dr Simon Brooks is currently carrying out a research project comparing public policy on second homes in Wales and Cornwall as part of his interest in language planning.

Dr Brooks has been shortlisted for the Wales Book of the Year twice, for his study of Enlightenment thought in Wales, O dan lygaid y Gestapo, and his study of 19th century Welsh nationalism, Why Wales never was.

Dr Simon Brooks is a regular speaker at cultural events and a guest of various BBC programmes. In recent years, he has spoken at the Hay Festival, and at various literary festivals across Wales including at the National Eisteddfod. He also writes for various public policy and cultural magazines such as The Welsh Agenda, Planet and Barn.