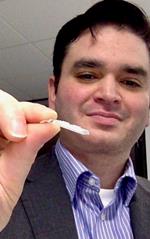 Dr Sanjiv Sharma received his PhD on the development of analytical methods for determination of certain pharmaceuticals and their metabolites using miniaturised separation system in 2001. His PhD supervised by Dr Sunil Kumar Sanghi, was  a part of an Indo- European Community joint research project on miniaturised separation system in collaboration with University of Amsterdam. He then performed postdoctoral research in the areas of high throughput sequencing, clinical proteomics and miniaturised analytical systems in France and Germany from 2001-2004. In 2004, he was awarded a Chevening Technology Fellowship to work with Professor Andrew deMello on microfluidic microreaction systems in the Department of Chemistry at Imperial College London.

On completion of his fellowship he joined the Institute of Biomedical Engineering, Imperial College London to work with Professor Tony Cass in the area of Bionanotechnology and Biosensors. Here he developed minimally invasive microneedles, from photolithographic fabrication to high throughput fabrication, taking these microneedles from the lab to the clinic . Sanjiv was involved in a NIHR (i4i) funded research project involving clinical studies in healthy volunteers and participants with T1D with renowned Endocrinologist Clinicians; Professor Desmond Johnston and Professor Nick Oliver. He has published over 50 research articles and has patents filed in Germany, UK and the United States.

Sanjiv is currently a Senior Lecturer in Medical Engineering in the Department of Engineering at Swansea University. At Swansea, he is working on therapeutic drug delivery and diagnostic (theranostic) applications of polymeric microneedles.